Eight months ago I sat next to Chris on a plane and watched him sleep. I studied his face and his eyelashes, I held his hand and looped my arm around his. I touched his thick, black hair.

I thought about how I would never get to see his black hair turn grey, how I wouldn’t know how handsome he’d be as the years went by.

How I wouldn’t get to keep him.

Someday — someday soon — I would wake up and he would tell me that his body was slipping away from him. Maybe his foot would catch when he was walking up the stairs. Maybe he wouldn’t be able to raise his arm above his head. Maybe he’d have trouble taking a deep breath.

I didn’t know what was coming next, I just knew it was coming. The future, our future, was filled with sadness and anxiety and worry and loss.

That, I thought, was my unavoidable, unquestionable reality.

But yesterday, eight months after that devastatingly sad plane ride to Miami, I sat next to my husband on an airplane and, again, watched him sleep.

And he looked just the same as he did that day in June.

It’s hard to fathom. But the miracle I am watching unfold in my life every single day was made especially apparent to me yesterday, when Chris sent me a text reminding me how quickly his uncles, dad and cousin died after being diagnosed.

His dad died 8 months after diagnosis. He was 68 years old.

His uncle Brad died 8 months after diagnosis. He was 52.

His uncle David died 8 months after diagnosis. He was 48.

His cousin Matt died 17 months after diagnosis. He was 28.

Chris has the same mutation they had and that comes with the same life expectancy. The only difference is the one that makes all the difference — the clinical trial Chris is in wasn’t available to them.

So eight months from diagnosis, Chris should have lost so much — things like his ability to walk, feed himself, fill his lungs with air, project with his voice, swallow without risk of choking.

But this last week, instead of coming home to tell me about a loss of function, he walked in the door after a normal workday (another thing he should not have at this point) and told me he regained a small bit of movement in his wrist.

I know I posted a video of this. I know so many people have seen it and rejoiced with us in this news. But as I watched him sleep so peacefully on our flight to Toronto this month, I simply could not fathom the miracle taking place here. 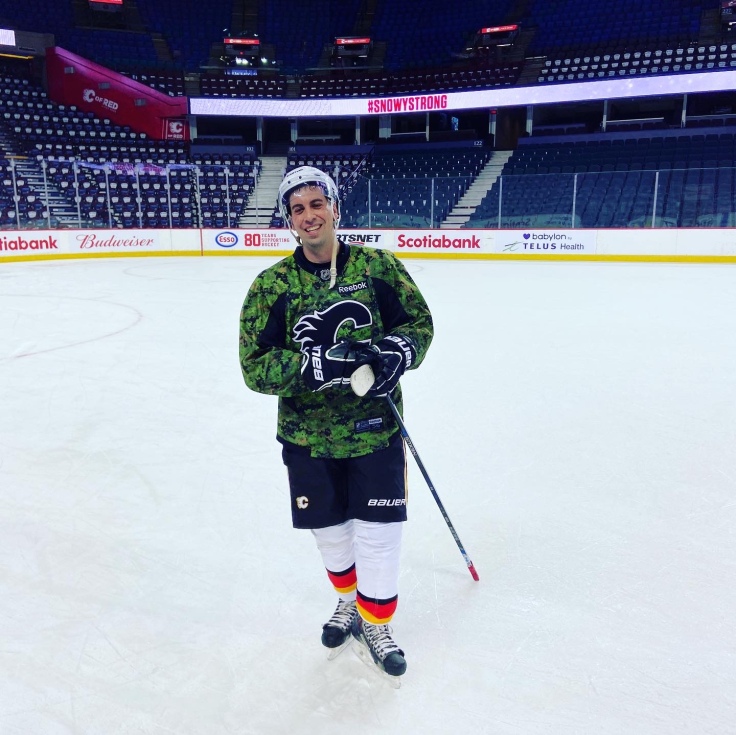 I cried again, but this time for a different reason.

My husband is living with ALS. We believe he has had zero disease progression since we started in this clinical trial. Instead, it seems some of his nerves might be healing.

So much of my life is spent getting through each day, taking care of the kids, checking in on Chris, checking in with doctors, reading, researching, writing, doing laundry, making lunches.

There is joy in each and every day of my life, joy in all the normalcy, joy in the kisses goodbye as Chris goes to work, joy in seeing him on the ice at our son’s hockey practices, joy in the life we weren’t supposed to be having at this point.

But in the chaos of everyday life I can also lose sight of the magnitude of what is happening here.

And, we wholeheartedly believe, it’s just getting started.